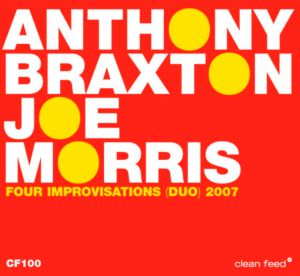 Anthony Braxton / Joe Morris – Four Improvisations (Duo) 2007 (CF 100)
*****
Congratulations to the excellent Portuguese label Clean Feed, not only because this is its 100th release, but also for their continuous effort to bring new avant and free talent into the spotlight, while at the same time managing to publish albums with vested names like Anthony Braxton and Joe Morris. Many (young) artists would not have received the possibilities they get now without Pedro Costa’s ongoing attention. And sure, not every album is a hit, but for me personally, some of the Clean Feed albums are in my list of most appreciated records of the last years : The Nu Band, Dennis Gonzalez, Mark O’Leary, Herb Robertson, Stephen Gauci, The Lisbon Improvisation Players, Carlos Barretto, Vinny Golia, Tony Malaby, Steve Lehman, Raymond MacDonald & Gunter Sommers, Adam Lane, Rob Brown, to name just a few.

Back to Clean Feed 100 : it brings four CDs of each one hour of free improvisation. And I must admit that I had my opinion about both Joe Morris and Anthony Braxton before putting on the first disc. I like Joe Morris’s sense of adventure, and I also think he has composed wonderful music (King Cobra for instance), yet I prefer him as a bass player than as a guitarist, because on the latter instrument he lacks lyricism, usually creating sounds as if his guitar is speaking rather than singing, or even reproducing the musical equivalent of background chattering. Braxton I like at times, but I find him often too abstract and intellectual.

But what you get here, goes totally against my opinionated prejudices. Maybe because the two musicians never played together, maybe because it’s entirely improvised, without prepared themes, melody, structure : it works beautifully. Morris’s soft-toned parlando style little guitar sounds seem to have an incredible effect on Braxton who is lyrical as I’ve seldom heard him. Both musicians listen extremely closely and actually compose on the spot, moving these long improvisations through different moods and musical landscapes, but then of the low and hilly kind, without high peaks or deep chasms. The music is fragile, sensitive, deeply emotional and vibrating with life and musical joy. This is disciplined, controlled, warm and creative music, and as free as it can get. You would think that four times one hour would be the perfect recipe for boredom, but it’s not : the four improvisations offer music with the same coherent focus, yet they are different, and there is even some kind of evolution to be noticed. On the first improvisation, both musicians start from their own comfort zone, easily recognizable as Morris & Braxton. On the fourth improvisation, the music sounds as if preconceived, with Morris playing arpeggiated figures and Braxton actually playing something close to a melody, including almost playing patterns and repetitions, but then not, just touching on them. And while Joe Morris keeps his guitar sound throughout the four improvisations, Braxton changes his instrument on a regular basis, using the whole sax range from sopranino to contrabass saxophone. And only when Braxton uses the latter, does Morris give his guitar a little more of a high-pitched tone. In the hands of amateurs free jazz tends to becomes cacophonic noise. Free jazz in the hands of masters is the ultimate form of music. This, this is sublime. This record is absolutely stunning. http://freejazz-stef.blogspot.com/