All About Jazz review by Martin Longley 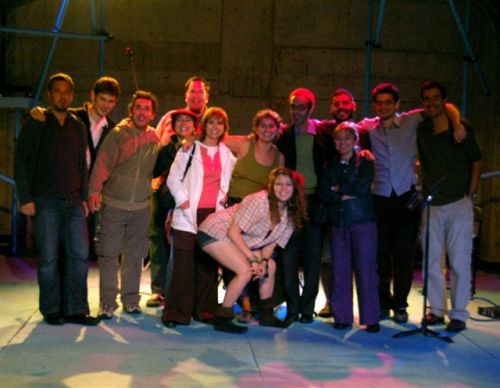 Last year, the Clean Feed festival was housed at The Cornelia Street Cafe, but for 2008’s six-day stretch this crucial Portuguese label has now moved to the slightly more formal environs of The Living Theatre in the Lower East Side. It was local beatnik poet Steve Dalachinsky who connected label with space, so he gets to emcee each night, encouraging folks to purchase discs, gobble olives and consume wine that just happens to originate from Portugal itself. Every night of the festival seems to bring a new piece of scaffolding to the surroundings, as set construction evolves for the next Living Theatre production. The stage lighting is quirky, too. Glowing washes bloom at seemingly inappropriate moments, then are quelled into dimness. After a few nights, this unpredictability takes on a strange charm.

Although stretching out its tentacles from Lisbon, Clean Feed has a strikingly complete understanding of the New York scene, or even, more specifically, the Brooklyn scene. This is underlined by the fact that they can organise a festival that almost exclusively features local combos, most of them throwing out an extreme degree of creative heat. Each evening features a double bill of acts…

Friday 19th: Normally, the opening set by the Drunk Butterfly trio (this is the name of their debut disc) would be a sufficient to produce a warm glow, but reedsman Mark Whitecage, bassist Adam Lane and drummer Lou Grassi end up being easily transcended by the Michael Dessen Trio. This Californian trombonist is just beginning to make his mark, and recently released Between Shadow And Space on Clean Feed. The wonders of that record are thankfully translated to the live stage, with Dessen utilising laptop alterations, but customarily in a subtle manner, organically re-curving his output. This set relishes extreme contrasts between near-silence and dense activity, moving from meditation to mash-up, without any sense of inappropriate behaviour.

Saturday 20th: Brooklyn tenorman Stephen Gauci’s Basso Continuo involves the central concept of twinned basses (Ken Filiano, Mike Bisio) and no drums, with the leader and trumpeter Nate Wooley building the front firing line. Somehow, the delicacy of the quartet’s interactions doesn’t sound as enveloping as on last year’s Ndidhyasana album, particularly as the basses sound quite thinly arrayed within the Theatre’s hard environs. The horns dominate, with their stringent chatter, and the sonic confrontations within the band tend to have a negative effect on the communal result. Fortunately, Gauci helps matters along by being in a particularly concentrated state, throwing himself completely into the music. There’s a different manifestation of power during Dual Identity’s set. These guys are even harder, and before long Damion Reid’s drumming style begins to batter on the cranium, trebly, cutting and militarily insistent. Around halfway though the set, the entire combo locks into a convoluted groove, and co-leader alto saxophonists Steve Lehman and Rudresh Mahanthappa begin a spiralling ascent, attempting to surmount each other’s solos in a totally gripping fashion. This is funk complexity in the post Prime Time anti-tradition.

Sunday 21st: This is the night that FONT Music and Clean Feed unite, with a pair of trumpeters to the fore. The Empty Cage Quartet, from Los Angeles, features Chris Tiner (flugelhorn), joined by reedsman Jason Mears, bassist Ivan Johnson and drummer Paul Kikuchi. Their set is adequate, but is topped by that of Dallas trumpeter Dennis Gonzalez and Brooklyn bassman Rachlim Ausar-Sahu, who necessarily opt for a spacious, thoughtful dialogue, peppered with some of the festival’s most mainstream moments. Effectively, this is the only unremarkable evening in Clean Feed’s kinetic run.

Wednesday 24th: Bassist Sean Conly’s Re:Action begin the evening in striking fashion boasting not only the fine horn thrust of trombonist Joe Fielder and saxophonist Michael Attias, the latter hefting his baritone with Herculean authority. All this, and their drummer is Pheeroan akLaff..! The only way to follow this combo is with the best presentation of this year’s festival, delivered by the mighty Hellbent, a newish quartet led by tenorman Michael Blake. He has a dream line-up convened to play a brilliant set of compositions, employing an instrumentation which is hardly typical in the jazz sphere: Marcus Rojas (tuba), Charlie Burnham (violin) and Grant Calvin Weston (drums). This is a team of fierce individualists, embracing funk and abstraction, employing tuneful riff-themes and disemboweling solo tactics. There’s an inspired confidence to their playing that lends the illusion of a casual engagement with the material. Burnham seethes with amplified power, stroking with liquid friction across his strings. Rojas is a buffeting presence, wobbling with great agility. Weston releases a storm of energy, completely uninhibited in his quest for the ultimate drum explosion. Clean Feed’s Pedro Costa admits that he’s not yet familiar with Hellbent, but it must be a certainty that there’ll be an album on the label’s prolific release schedules in the very near future.
http://www.allaboutjazz.com/php/article.php?id=31004

This entry was posted in Concerts, reviews. Bookmark the permalink.