John Hebert Trio – Spiritual Lover (CF 175)
Some kinds of jazz need gizmos and tricks, other types predicate spirituality yet sound so hackneyed that one prefers spending evenings by revisiting James Taylor’s discography (no irony here). Spiritual Lover, a fruit of the empathy between double bassist John Hébert, keyboardist Benoit Delbecq (on piano, clavinet & synth) and drummer Gerald Cleaver, is an album that — as strongly rooted in the jazz idiom as it is — gives an idea of lucidity in terms of instrumental interconnection, and unambiguousness of intent as far as concision and directness of the tunes are concerned. The interplay is clear-headed, to the point, romantic when necessary (“Cajun Christmas”), timidly revealing influences without necessarily allowing for direct reference.

Quite frequently the central figure appears to be Delbecq, who alternates befuddling investigations and flowing progressions, switching to tasteful counterpunching when the rhythmic component comes to the fore, as it happens in “Ando” — perhaps the most nervous piece on offer, sort of a clash of divergent African beats and a twitchy Paul Bley figure layered upon an ostinato pattern. Whereas Cleaver’s prowess is also perfect for suffusing a structure with a degree of unexplained whispering — his work with brushes totally masterful — both the expert compositional hand and the sober technical virtuosity shown by Hébert are enough to maintain the level well above average, frequently transporting the listener into a world where impertinence and excessive permission are replaced by the kind of discipline that certain fringes of contemporary music often lack. He makes those bass lines count!

Thus, even a strange tune like “Guacamole” — brooding piano underlined by the distant chattering of the ghost of a clavinet, until the whole turns into sour freeform — works well as a logical course of action, letting us enjoy creative brightness while reminiscing about places we won’t be visiting again, but whose mental image delineates our melancholic memories (“Le Rêve Eveillé”).
http://www.squidco.com/cgi-bin/news/newsView.cgi?newsID=1172

TGB – Evil Things (CF 181)
Portuguese trio: Sérgio Carolino (tuba), Mário Delgado (guitar), Alexandre Frazão (drums). Delgado wrote six pieces, Frazão three; one is a group improv, and four more are from others — only one my eyes can make out is Bill Evans. Rather scattered, as you might expect given how they juxtapose originals named for “George Harrison” and “Aleister Crowley” — the latter may be the one that sounds like slightly bent Black Sabbath. The tango/soundtrack-ish “Close Your Eyes” is a choice cut, and the high-speed tuba bebop solo on “Tangram” is a hoot, but there’s too much evil for my taste; suggest they lighten up and call their next one Mischievous Things. B+(*) 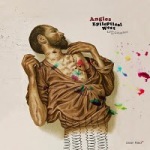 Angles: Epileptical West: Live in Coimbra (CF 182)
Sextet, haven’t tracked every member down but safe to say Scandinavian. Leader is Swedish alto saxophonist Martin Küchen, b. 1966, nothing under his own name but also works in Exploding Customer (which has scored a couple of HMs here), Trespass Trio, and Sound of Mucus. Second album for group, with Magnus Broo (trumpet), Mats Älekint (trombone), Mattias Ståhl (vibes), Johan Berthling (bass), and Kjell Nordeson (drums). Big beat, roiling horns, scattered tinkles from the vibes, loud and propulsive. Makes me smile all over. A- 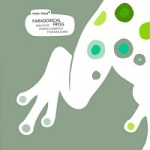 Kris Davis/Ingrid Laubrock/Tyshawn Sorey – Paradoxical Frog (CF 183)
Not familiar with Laubrock, although she also appears on the Tom Rainey record still awaiting my attention. Tenor saxophonist, b. 1970 in Germany, based in London and/or Brooklyn; five albums since 1997 by most counts, which file this one under Davis, a pianist from Canada who specializes in fast and furious saxophonists — Rye Eclipse with Tony Malaby is my top recommendation. Sorey is a drummer, plays in Fieldwork and has a couple albums on his own that are more focused on his composition than his percussion. This should click in interesting ways, but Laubrock isn’t that fleet and that seems to slow down the others. Also a queer stretch of silence (or very low volume) creates a false ending — not sure what’s going on there. B+(*)

Tom Rainey Trio – Pool School (CF 185)
Album says this was recorded “on September 4th, 2010” — I assume that’s a typo for 2009. Rainey is a drummer who’s made a big impression, especially in Tim Berne’s groups. Has a long credits list going back to 1987, but this is the first album under his own name. Gets all the composition credits, too. Trio includes Ingrid Laubrock on tenor and soprano sax and Mary Halvorson on guitar. Both tend to wobble here, which is sort of an art form for Halvorson, harder to speculate on with Laubrock. Free playing, takes a lot of attention, doesn’t give much back, even from the drummer. B+(*)
http://tomhull.com/blog/archives/1434-guid.html