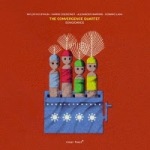 Convergence Quartet – Song/Dance (CF 187)
The Convergence band name is particularly appropriate, as this group’s members are drawn from England, Canada and the USA. There is also a cross-pollination of styles and influences, as well as geographic backgrounds.

Taylor Ho Bynum blows cornet and flügelhorn, and made his name as a latter-day sideman to Anthony Braxton. In recent years, Bynum has been expanding his own presence as a bandleader and composer. Drummer Harris Eisenstadt has recently made a mark with his Canada Day combo, and is now dwelling in New York City.

Over here in the UK, bassist Dominic Lash is a semi-obscure force amongst the hardcore improv community, with one leg in the rockin’ free-form camp. Pianist Alexander Hawkins is the least familiar member of this unlikely transatlantic foursome, though he’s fast becoming an important presence on the improv scene.

All of the Convergers are concerned with improvisation, composition, and the unpredictable trajectories that lie between these two territories. The composite style of this band is made up from some very diverse elements, but they perform the magical sleight-of-hand that allows the retention of individuality, at the same time as developing a highly structured set of group themes that are blessed with a melodic openness.

Complete equality is the mission. All four players contribute pieces, and when they solo, these spot-lit passages are invariably pointed and brief, standing aside for the next volley, or awaiting an incoming ensemble theme. The tunes are tightly arranged, but this doesn’t inhibit their spontaneous fire. The album is crisply recorded, with Bynum’s horns being particularly close-mic’d, his ornately muted parps worming deep into the listener’s ears. Simultaneous soloing abounds. The next move is rarely predictable. A moderate-length piece will pass through many sections with great rapidity.

Frequently, a solo stretch might be completely unaccompanied. A swift spell before the band jumps back into the fray. On Next Convergence, Hawkins is scattering aggressive piano shards, climaxing with some full elbow-ramming (or so it sounds). He’s chased by a completely lonesome running bass solo, and a theme comes together. But no! We’re immediately off into a capsule drum solo, upended across the melody.

Opening his own Iris, Bynum alternates between sharp pricks and blubbery expulsions, then a duet of clipped drum-scatter and ravaged bow-bass suddenly calms for a soft floatation theme as the cornet re-enters. This can only be followed by a free-barrelhouse piano solo, and this is exactly what Hawkins delivers.

Besides the deep substance of the band’s own compositions, they also include a South African traditional tune and an old classic penned by the violinist Leroy Jenkins. Whatever the material, the Convergers operate a subverted organisational approach that results in a sustained sense of open-mouthed surprise.
http://www.bbc.co.uk/music/reviews/q2cg

Elliott Sharp – Octal: Book Two(CFG 004)
Elliott Sharp, guitar pioneer, composer and multi-instrumentalist, has always seemed to go his own way, in the process becoming a major presence in the now globally recognized downtown music enclave. He’s successfully created Sharpesque interpretations of the blues, composed and performed exciting works for both small and large ensembles, hosted a web radio show of great diversity and discernment for MOMA’s PS1 web site, among other things. He’s also recorded a series of improvisations for solo guitar.

Octal Book Two (Clean Feed CFG 004) finds Mr. Sharp on his Koll 8-string electro-acoustic guitar, which has both conventional and bass guitar strings. Without overdubs he creates a kind of suite of guitar events, each concentrating on various avant and conventional techniques that Sharp uses. Some he has developed in his own way; others, like harmonics, feedback sustain, and hammerings, he adapts to his own purposes.

What distinguishes Sharp’s music from some other unaccompanied solo avant guitar efforts is that each event to a lesser or greater degree concentrates on a melodic cell, scalular passage or quasi-riff. The music is freely articulated but not free in the stream-of consciousness manner. It is Elliott’s strong sense of structure that gives the listener clear musical sign-posts through the avant sound thicket (at least that is so for me). Each is a semi-miniature impro-compositional gem. He does not eschew repetition, and much of the music features dynamically invigorating cascades of rapidly articulated repeated lines. This of course is a feature of Elliott Sharp’s style and it is paired down to a single solo voice for this outing.

It shows that Elliott Sharp’s motor-sensory brilliance has in no sense abated. He is vital still.
http://gapplegateguitar.blogspot.com/