All About Jazz-New York review by Kurt Gottschalk 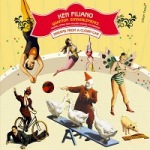 Ken Filiano & Quantum Entanglements – Dreams from a Clown Car (CF 207)
A circus is one metaphor you could draw for the new  disc by bassist Ken Filiano’s quartet QuantumEntanglements, a point verified by the fact that they suggest as much in the album’s title. But there are many other illustrations that might be drawn in response to the album – a jet engine plume seen (and heard) unfurling from very close proximity, perhaps, or an oil fire in a harmonica factory – but the point is that this is music that calls out to be named something and Dreams from a Clown Car is as good as any other moniker depicting joyful mayhem (and lends itself to some nice cover art as well). Illustration aside, this music is a polyphony bordering on cacophony, a methodical madness, a bright burst where not everything can be discerned atonce in the tradition of the Coltrane Ascension or the Coleman Free Jazz. This is not a measure of greatness, it is merely a mapping and the distinction between those watershed moments of the ‘60s and the current audio document (besides the passage of time) is that in this case the music is made by just four men. What Quantum Entanglements has that those earlier boundary-breaking bands didn’t employ is the electronic effects applied to the upright bass. Filiano’s subtle use of filters creates a soundbed that, against the rumble of Michael TA Thompson’s drums, can beheart-stopping. At the finest moments, Michaël Attias is also heard on bari sax, leaving an open sky (there’s that jet engine plume) for Tony Malaby’s soprano. Such is not the whole of the disc. Unlike the Coleman and the Coltrane, Dreams from a Clown Car is not about epic pronouncements. It’s seven evenly placed tracks, mostly hovering around the 10-minute mark, including some ballads with a classic feel, here perhaps referencing Charles Mingus or Oliver Nelson, if with a more contemporary structure. Again, lofty points from which to swing (not unlike a trapeze act) and with the implication that if all here is not entirely new, it’s played with a strong dedication.