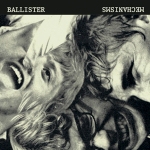 All About Jazz review by Glenn Astarita

Boris Hauf Sextet – Next Delusion (CF 238)
Reedman Boris Hauf frequently pushes the envelope. For evidence, one need only look at his longstanding affiliation with the avant-garde, acoustic-electric Austrian band Efzeg, known for subliminal sound-sculpting mechanics and ethereal subtleties. However, his repertoire is quite extensive. Making frequent trips to Chicago over the years, he has aligned with like-minded individuals and noted improvisers, often residing on the same musical plane, similar visions coalescing for unpredictable outcomes. On this release, Hauf merges a three-horn attack with three drummers. Needless to state, the band’s makeup and scope of intent offer abstract permutations amid a keenly inventive platform, where hidden meanings are slowly revealed.

At times microtonal, Hauf leads the ensemble through layers of minimalism planted on understated motifs and asymmetrical pulses. The musicians slowly gravitate via a “rising from the ashes” sensibility that is spiced with ominous scenarios amid a symphony of tumbling polyrhythmic drum parts, casting an implied sense of urgency throughout. For instance, on “Fame & Riches,” the popping notes and rhythmic tapping maneuvers from the horns border on a serious-minded cartoon vamp played in concert with haunting soundscapes and low-key treatments, such as the drummers’ China cymbal swashes.

Jason Stein’s flickering bass clarinet notes, accented by free-form percussion grooves, parlay a vibe of happenstance during “Wayward Lanes.” However, the band renders a brash climate as intense dialogues ensue, leading to a heavy-handed military beat fused into hyper-mode and prompting a day of reckoning type situation. Therefore, Hauf’s undulating frameworks and impressionistic tendencies spin a phantasmagoric slant into a setting that is open for interpretation via transposable plots divulged on subsequent listens.
http://www.allaboutjazz.com/php/article.php?id=41914