I’ve been aware of the existence of these two CDs, but given the generous output of the Clean Feed label over the past few years, I’d never gotten around to exploring them until now. I’m glad that I did, as the core group offers an interesting take on the piano trio. In fact, with the sound they generate, “piano trio” doesn’t really come close to describing their approach. I really like the use of space on both recordings; it generates both tension at various points and a sense that the musicians are letting events unfold naturally, though not languidly. 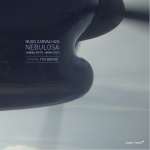 Hugo Carvalhais – Nebulosa (CF 201)
On Nebulosa, Tim Berne again displays his ability to blend well with different situations, something I wouldn’t have expected from someone who has such an idiosyncratic approach. He takes a prominent role on the six tracks (out of ten) in which he participates, but doesn’t dominate, instead respecting the dynamic of the trio. In spite of my fondness for certain fusion groups from the bad old days, I’m hesitant when I see the word “synthesizer” on a CD cover. Pinto for the most part avoids the clichés, with his sparse approach working in his favor, the occasional texture from Mr. Gone-era Weather Report a little too prominent.

Hugo Carvalhais – Particula (CF 253)
Particula grabs you from the opening notes, with sparse piano over a background of ambient sound. This is not a trio-with-guests recording; the whole unit is razor sharp, able to turn on a dime from what sound like group improvisations to solo spotlights. Parisien and Pifarely are excellent throughout, and the electronics are better integrated on Particula as well. Costa the drummer really makes this group. He reminds me a little of Gerry Hemingway in that he shapes the flow and energy, and can be forceful when that’s required.
http://www.improvisedblog.blogspot.pt/2013/09/catching-up-with-hugo-carvalhais.html