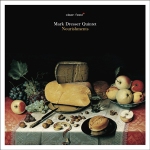 Mark Dresser Quintet – Nourishments (CF 279)
The technical proficiency of creative musicians has grown so much over the last few decades that you can write a piece that “phases a seven-bar melody in 5/8 over a five-bar bass line in 7/8” and the group can make it sound as natural as breathing. The Mark Dresser Quintet manages to do that with Rasaman, one of seven tracks on the fulfilling and adventurous Nourishments. Dresser, a virtuoso bassist and a broadly imaginative composer, has gathered old and new friends for this group. Denman Maroney, master of the “hyperpiano” extended piano technique, and drummers Tom Rainey and Michael Sarin have been involved with Dresser’s projects going back decades. Poll-winning alto saxophonist Rudresh Mahanthappa has been in a trio with Dresser and percussionist Gerry Hemingway since 2004, and trombonist Michael Dessen has worked extensively since 2008 with the bassist on “telematic” performances linked “via high-bandwidth fiber optic network” connections. As sometimes happens with new ensembles, the previous connections of the musicians in other contexts gives them a head start on developing a group sound. Dresser’s informative liner notes state that this music “is centered around a personal approach to the jazz tradition and the song form…” Some of these original compositions are adapted from other contexts. The marvelous Aperitivo, with its seductive “metric-modulating form that slows and speeds from bar to bar,” first appeared on his Time Changes CD for Cryptogramophone, where it featured vocalist Alexandra Montano. The lengthy and complex title piece, the centerpiece of the CD, was originally conceived for musicians playing telematically in New York and San Diego. References to Monk (in the middle of Nourishments), Mingus (in the smoking opener, Not Withstanding, co-written with Mahanthappa), and the blues (Aperitivo) are filtered through Dresser’s experiences in a variety of musics and his predilection for metric manipulation. The expectation for this lineup is for powerfully individualistic solos, and starting with Mahanthappa’s fiery turn on Not Withstanding, these players do not disappoint. Amid all the tempo shifting and metric complications, the quintet rises to the occasion again and again, animating Dresser’s complex structures with a canny blend of technical rigor and emotional force. Difficult to play, perhaps, but a distinct pleasure to listen to again and again. Nourishments is a beautifully realized project and is highly recommended.
http://skremsky.tumblr.com/