All About Jazz Italy review by Paolo Peviani

BassDrumBone – The Other Parade (CF 223)
Thewes/Oestreich – 10 Pieces (Gligg Records)
Contemporary trombonists’ command of multiphonics as well as more conventional techniques has made their playing more versatile. But it’s still a rare trombonist who is confident enough to have his as the only horn in any sort of ensemble. Two who face the challenge admirably are American Ray Anderson, one-third of the 33-year-old BassDrumBone band and German Christof Thewes, part of numerous Continental combinations. The Schiffweiler-based brass man has given himself an even tougher assignment than Anderson. For while the Yank has long been partnered by bassist Mark Helias of New York and drummer Gerry Hemingway, who now lives in Luzerne, 10 Pieces is a CD of stark improv involving Thewes and bassist Jan Oestreich from Saarbrücken. Still, surprisingly or not, both CDs come off as equal, demonstrations of trombone triumphs.

A veteran bull fiddler, Oestreich has played with everyone from vocalist Joe Lee Wilson to saxophonist Archie Shepp, while Thewes has played with the Globe Unity orchestra and Uli Gumpert’s Workshop band as well as in smaller ensembles with pianist Uwe Oberg and drummer Michael Griener. However in essence, this particular duo session is designed to showcase the timbral strategies of each player and demonstrate how instantaneously each can respond to what his opposite number creates.

For instance, “Piece 9” joins stop-time linear movements from the ’bone man with walking bass lines which appear after Oestreich has demonstrated his guitar-like string twanging. Soon Thewes accelerates to brassy, triple tonguing spits while simultaneously slurring adagio-paced basso timbres back into the horn`s body tube. Before a coda of staccato brass bites, the two recap the head in unison. In contrast, tracks such as “Piece 2” and “Piece 3” points out how Thewes’ plunger tone shakes respond to the bassist stretching his lines with a mixture of spiccato and shuffle bowing, guiding Oestreich to woody angled string pops on the subsequent track, which are met by an equivalent rappel up the scale with tongue stops, slurs and splutters from the trombonist. Finally, as Oestreich slaps the waist and belly of his instrument, the duo reveals a polyphonic theme that sounds as if it just wandered off the TV from the soundtrack of a Cop show.

By the last piece the trombonist and bassist have worked out a formula that allows them to switch parts back and forth with effort. Widely reverberating bass lines turn to subtle string stretching as Oestreich’s steadily thumps, then these string expressions are bisected by Thewes’ staccato bites and slides. Later the trombonist’s emphasized cries leaves enough open space for great, woody bass slaps from Oestreich, although shortly afterwards the bull fiddler’s combination string stretching and percussive vocalizing are decorated by rubato brays and tongue slurring from the brassman. Probably the most spectacular example of Thewes’ skill however is on “Piece 7”, where multiphonics make it seem as if he’s playing two horns at once. There are speedier and restrained plunger sequences which are interrupted by slower, mid-pitched basso tones. Eventually the wheezes and fortissimo cries multiply to such an extent that both brass lines appear to be moving at the same time.

If there’s another trombonist even more cognizant of what a slide, tube and valves can do then it’s Anderson. One of the first brass players not affiliated with any school, throughout the years he’s added the freak effects of pre-modern soloists to the technical smarts of the Boppers … and gone beyond even that. More than an instrumental virtuoso, he also composes pleasing themes, as he proves on The Other Parade. However compositional duties aren’t limited to one trio member, as all demonstrate throughout.

Hemingway’s sophisticated percussion adds another color to the kind of interaction Thewes and Oestreich exhibit on the other CD, but the drummer is sensitive enough to keep each side of the triangle balanced. On Anderson-penned “Lips and Grits” and “King Louisiana”, for instance, his clatter, snaps, beats and cymbal claps are close cousins to Classic Jazz, with the New Haven-born percussionist suggesting the drumming of New Orleans’ Baby Dodds. Helias’ slap bass trading fours with the drummer’s rim shots at the climax of “King Louisiana” admirably fit this post-modern conception, as do the bassist’s stentorian thumps à la Pops Foster throughout both pieces. Meanwhile the trombonist mixes up his capillary expression. Sometimes it’s back-of-the-throat sputters and rubato wah-wahs, other times his bass register guffaws stay in that clef, as chromatic spits that could come from a cornet are also heard.

These variants of Old Timey and New Thing ideas further separate this trio from the other duo. On careful listening however, it’s evident that Anderson is stretching trombone timbres the same way as Thewes does on the other CD, although in the song form rather than as stark New music expositions. “The Blue Light Down the Line”, the feature Helias composed for Anderson, illuminates this still further. As Hemingway stays in the background with light taps and the bassist stretches and vibrates his strings rhythmically, the trombonist moves from vocalized hand-muting to gutbucket shading, to constricted grace notes, and finally to a capella guffaws and shakes.

The Hemingway-penned title track and concluding track put a finer point on all this, with the jocularity of other tunes traded in for a mournful theme, reminiscent of a Second Line or Mummer’s funeral parade. Not in march tempo however, the bass and drum parts harmonize in such a way to move the piece forward linearly, as the trombonist purrs and buzzes first quickly than moderato. The finale matches an expansion of metallic brass textures and martial rat-tat-tats.

Should folks still doubt that trombones can’t carry their own weight musically in stripped-down situations, a quick listen to either of these CDs should change minds very quickly.
http://www.jazzword.com/review/127687 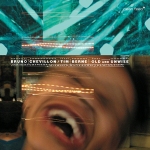 BassDrumBone – The Other Parade (CF 223)
Featuring nine new compositions commissioned by Chamber Music America’s “New Works” program, The Other Parade was recorded in August 2009 in honor of BassDrumBone’s 30th anniversary. Since 1977, trombonist Ray Anderson, bassist Mark Helias and drummer Gerry Hemingway have constituted the longstanding trio, whose 1979 debut recording Oahspe (Auricle) was recommended by Cadence founder Bob Rusch as “Exceptionally good music, fearlessly played and tightly coordinated.” To their credit, the same could be said of their most recent effort, more than three decades hence.

Though the group has weathered dormant periods, their virtually clairvoyant rapport has continued to grow, lending a timeless air to an approach that draws from every facet of jazz lineage for inspiration – from Dixieland to free. Balancing inside and outside aesthetics with seamless transitions between composed and improvised passages, they upend hallowed customs with cagey arrangements that invert prescribed instrumental roles. Despite being the sole horn, Anderson makes ample use of space and silence, occasionally sublimating his bright, cheerful tone and mercurial phrasing in support of Helias’ buoyant pizzicato excursions and Hemingway’s sanguine percussion ruminations; in effect, all three musicians are responsible for providing melody and rhythm.

As composers, each member contributes equally to the session; yet despite the subtle stylistic variety of their writing – which veers from expressive blues and mid-tempo swingers to greasy funk grooves and rousing second-line struts – these lyrical pieces all exude a cohesive sensibility redolent of their authors’ stylistic accord. Endlessly shifting dynamics within each tune, they vary rhythm, tempo and tone with their carefree, synergistic rapport.

The strutting opener, “Show Tuck,” demonstrates their effortless integration of avant-garde elements into structured improvisation. Taking the lead after a funky opening theme, Anderson’s solo modulates from harmonious to discordant, intensifying into blistering chromatic runs that culminate in rip-snorting bellows and gutbucket slurs. The further out Anderson ventures, the more abstract Helias and Hemingway’s interplay becomes, devolving into a pithy three-way conversation. Hemingway’s nimble drum solo follows, emulating the harmonic implications of the core melody with a graceful transition back to form. Similarly, Anderson’s madcap muted lyricism provides consistency to the deconstructed blues “The Blue Light Down The Line,” as Helias and Hemingway weave a spare underpinning that nudges the piece forward with laconic pacing. Rooted in convention, tunes like “King Louisian,” “Soft Shoe Mingle” and “Lips and Grits” work progressive variations on foundational tropes, hearkening back to Dixieland and Ragtime.

Anderson, Helias and Hemingway have each matured into venerable solo artists over the past thirty years, together as BassDrumBone they persevere as an increasingly rare entity – a touring collective that incorporates new material into their oeuvre that is as fresh and exciting as their formative efforts.
http://www.pointofdeparture.org/PoD36/PoD36MoreMoments2.html

So Jazz review by Kalcha

All About Jazz Italy review by Vincenzo Roggero